You are shopping for a really good radar/laser detector and the K40 Platinum100 Detector catches your eye. You see that it comes with a remote control and can’t remember ever seeing a radar detector that has one of those. Then you see the price and you’re not sure if spending that much money for a radar detector is what you really want to do.

To put it in perspective, you need to consider how much a speeding ticket can cost you. The true cost is higher than just the fine that comes with the ticket. You have also got to figure in the points on your driving record that probably will increase your insurance premium. The average cost for a speeding ticket is $150. The state you live in can greatly influence an increase in that monetary fine. Your insurance premium is also likely to increase 15% for just your first ticket. For many drivers, that alone increases the cost of the violation a few hundred additional dollars. >>> Check current price on Amazon

Maybe you have already gotten a speeding ticket and you want to make absolutely sure you don’t receive a second. You never want to risk you finances on an entry-level radar detector. That’s why you should consider the K40 Platinum100.

Long Range Detection – the Platinum100 has LNA (Low Noise Amplifier) technology and a more powerful CPU. This technology increases the range of detection and sensitivity beyond any other radar detector on the market and can be updated as future advancements become available.

Customizable GPS – GPS capability is a must for great protection from police radars and lasers. (>>> Find our top picks of laser detectors here) There are five settings that can be used, from marking non-police radar and red light camera locations to an auto filter setting that allows you to set the unit’s sensitivity based on the speeds you drive.

Advanced Band Filtering – the Platinum100 will ignore signals from CAS (collision avoidance systems), highway traffic flow sensors, and signals from other radar detectors and satellite radio broadcasts that can also cause false alerts in some low-cost detectors. The Platinum100 is also capable of being “tuned” to alert to specific radar bands only.

Remote Control – no other detector offers you the ability to control your detector with a remote. You no longer have to awkwardly reach halfway across your vehicle while driving at speed to silence or adjust your detector.

Ticket-Free Guarantee – find another manufacturer that will guarantee that you will not get a ticket while using their detector. During your first year of ownership, if you get a speeding ticket, K40 Electronics will reimburse you for it, and they have been doing so since 1983.

Optional K40 Laser Defuser – carry your protection one step further by adding on this option. The K40 Defuser plugs into the detector and makes you completely invisible to police laser guns. 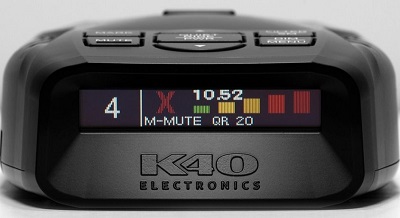 Buy a low-end radar/laser detector and eventually, you will disregard any alerts because of how many times the detector has cried “wolf”. Until that is, the red and blue bubblegum machine pulls in behind you and pulls you over. That will never occur with the K40 Platinum 100. This detector will give you plenty of advance warning, identify the radar band it is alerting to, and indicate which direction the threat is coming from. >>> Check price on Amazon

The programmable GPS function allows you to mark regularly encountered non-police signals so that you are not alerted, and to also tag fixed speed trap locations (red light cameras, etc.) so that you are alerted. By successfully avoiding just one or two speeding tickets, you will have covered the cost of the K40. And remember K40’s guarantee, if you do get a ticket during your first year using the Platinum100, they will reimburse you for the cost of the ticket. That’s a winning combination if ever there was one.