Whether you drive for a living, live to drive, or you are a busy suburban mom transporting children to and from activities and meetings around the town, you could greatly benefit from owning a K40 Platinum 360 radar detector.

In today’s hustle and bustle world it’s easy to get distracted and lose sight of changing speed limits, red light and speed cameras, or hazardous road conditions that may lie ahead, just down the road. Having a dependable radar detector that will provide early warnings can be of great assistance. And when it comes to a dependable radar detector, it’s hard to beat the K40 Platinum 360 Front and Rear Radar Detection System. >>> Check current price on Amazon

This is not your typical stick-it-to the-windshield radar detector. K40 recommends that you have this detector professionally installed due to the wiring that needs to be done to connect all of the various components of the system. There are two radar detectors, one to mounted on the front of your vehicle, the other on the rear. There is a nerve center, or brains of the system, that mounts behind the dash or some other area that can’t be seen and everything is wired to it. There is a separate speaker that will sound the alerts, a GPS antenna, and two laser diffusers, which need to be mounted on the front of the car.

You receive alerts from the Platinum 360 in two ways. The first is your normal audio alert. The alert will identify what type of radar has been detected and whether it is in front or behind you. The second way is two LED lights that can be mounted wherever it is convenient for you, in the instrument cluster or elsewhere on the dash.

Another feature of the K40 is that it can be integrated with your vehicle’s multimedia screen via iDatalink Maestro. This allows the detectors information to be displayed directly onto your vehicle’s center screen.

K40 is the only brand of radar detectors that comes with a remote control. Using the wireless remote, you can control all of the functions of the detector, from turning the detector on and off, adjusting the volume of alerts, to dimming or brightening the LEDs, and more. Or there is a wired control unit that can be flush-mounted and will appear to be a factory-installed option. 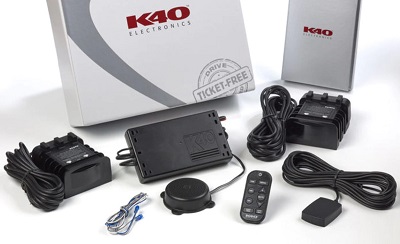 The platinum 360 has remarkable GPS capabilities. When driving through an area that you know the alerts are false ones, you can use the GPS to mark the alert to eliminate it. You can also mark an area where you commonly see police using their radars to have your detector to sound a warning approximately ¼ mile before you approach it. You can also use the GPS function to mark your approach to dangerous intersections and schools zones so that you drive safer. The GPS can monitor your speed in five mph increments from 5-75mph and alert you if you begin to exceed your selected limits. It also has a Quiet Ride mode in which the detector will sound no alerts when you are driving at the posted speed limit.

You can adjust band sensitivity to decrease false alerting. Doing so will eliminate non-police radar detection from things like storefront door opening systems and Blind Spot Monitoring systems on newer vehicles.. The Platinum 360 has City and Highway modes of operation and will detect MultaRadar CD/CT photo radar systems.

Within the first two years of using the K40 Platinum 360, K40 guarantees that you will receive no tickets for speeding. If you do, K40 will reimburse you for the cost of the ticket.

Instead of trying to talk your way out of a speeding ticket when you get pulled over, you can avoid the situation entirely by owning and using a proven radar detector like the K40 Platinum 360. If you are going to make the investment in a radar detector, you want one with the latest technology, great range and sensitivity, and a ticket free guarantee. >>> Check current price on Amazon