Let’s face it; no one likes a speeding ticket, even if they deserved one. A cop will just clock your speed on their radar gun, and you’ll be the one paying the fine. But what if there was a way you could detect a radar gun way before you got detected by it?

That’s what a highway radar detector does. These detectors alert you when a radar gun is nearby, allowing you to reduce your speed and avoid getting that speeding ticket. For today, let’s take a look at the two topmost radar gun detectors: the Uniden DFR1 and the Uniden DFR3. Both have a similar operation but are very different performance-wise.

Uniden DFR1 vs DFR3 Side by Side:

But before we get into the full Uniden DFR1 vs DFR3 comparison, let us look at the factors that affected our decision.

Radar detectors are illegal in certain states and can land you a hefty fine. Radar-detector detectors (also called RDDs) are used by cops to detect nearby RDs. RDDs come in different “Specters.”

Radar detectors should be able to slip under RDDs of Specters I, IV, IV+, and VG-2. Both of the products in this comparison can do that. However, the DFR3 has a more refined technology and can slip under the radar more efficiently.

Not just RDs, but all driving equipment should be easy to read at a glance. That means no jargon, no words, and easy-to-interpret symbols and readings. Colored Icon Displays are the best for this job, as they are bright, colored, and use simple symbols.

Both the DFR1 and the Uniden DFR3 use an Icon display. However, DFR3’s display uses a numerical frequency display, whereas the DFR1 uses a bar graph. Also, the DFR3’s screen doesn’t seem to have an ‘L’ symbol for LASER, although LASER detection is featured.

As for alerts, both products feature a Mute function to mute the alarm. The DFR3 also has a Voice Alerts feature.

Radar guns aren’t the only things that use the radar frequency that your RDs detect. Automatic sliding doors, traffic monitors, electronic signs, and IVTs all use similar technology, and they can be detected by your RD, resulting in more alerts than you need. Plus, these frequencies can drown out the frequencies used in actual radar guns.

A false alert filter removes the excess frequencies by pinpointing an exact frequency range used by a radar gun. Most radar guns use LASER signals, so the filter looks for only those. Also, it reduces the signals max range in urban areas to reduce the chances of an error.

Of the two products in our comparison, both feature a City/Highway mode. But what’s really of interest is the Advanced K False Alert Filter technology used in the DFR3. This technology, along with the City Mode, accounts for a smaller error margin. 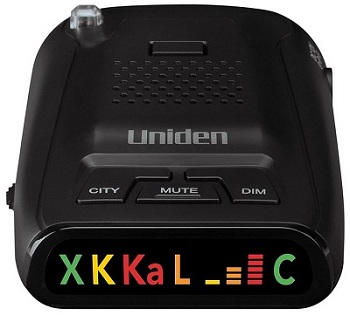 The Uniden DFR1 is a long-range radar detector that comes at an affordable price. It’s an excellent detector for use on both the highway and the city. It features an LED screen with bright colored icons and symbols against a completely black back panel.

The DFR1 features two modes: City and Highway. The Highway mode provides a longer range and is great for use on the highway or in very remote areas. The City mode reduces its range and changes the frequency band to only detect radar guns. It reduces the chances of false alerts from magnetic doors and the like. You can toggle between the modes by pressing a single “City” button.

Four frequency bands are featured on the DFR1: Ka, K, X, and LASER. In addition, it’s designed to counteract Specter I, IV, and IV radar-detector detectors. The frequency band can not be tuned manually. Instead, the City and Highway modes automatically optimize the frequency.

Speaking of modes, the DFR1 has a new feature called the Mute mode. In this, alerts for all frequency bands, including LASER, are muted. Additionally, the DFR1 features a DIM mode that dims all lights and visuals.

The Uniden DFR1 includes a DC charging cable that goes into your vehicle’s cigarette lighter. The Icon Display also shows the strength of the signals being detected, and what type of signal you are currently detecting.  It is one of the best technologies for when you want to hit the road. Check full review of this detector here 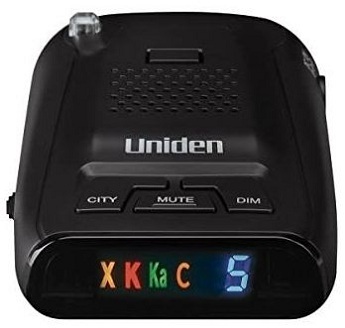 Next up is the Uniden DFR3. This long-range radar detector is quite similar to the DFR1, but with slight changes. The DFR3 still has a colorful Icon display, but it displays a numerical frequency strength monitor (1 through 5) instead of the bar graph design. This makes it simpler to read and makes getting info quick and easy.

The DFR3 operates on the Ka, K, X, and LASER frequency bands. Not only that, but it also features an Advanced K False Alert Filter. It is a new feature not seen in the DFR1. With the False Alert Filter, it can automatically reduce the chances of a false alert from automatic doors.

Apart from that, the DFR3 cannot be detected by Specter I, IV, IV+, and VG-2 radar-detector detectors. Radar detector alerts can be pretty loud, so the Uniden DFR3 features a Mute mode. It also has a Dim mode to reduce lighting in case you get pulled over and don’t want to get caught with a radar detector.

What else is new in the DFR3? Well, you get a longer range, but it’s never specified exactly how long. Also, you get a Voice Alert feature. Aside from that, the regulars are still there, such as the City/Highway mode, and the colorful Icon Display. Click here for our more in-depth Uniden DFR3 review.

It depends on where you live. Look into the legislature and de-facto laws in your area, and learn from the experiences of friends and family. In the US, for instance, radar detectors are legal in all states, except in Washington DC, Virginia, and on military bases.

Also, radar jammers (a completely different technology) are illegal in many states. So make sure you don’t accidentally get a radar jammer instead of a radar detector. Keep in mind that radar detectors are banned in commercial vehicles in all states of the US.

How Do Radar Detectors Use GPS?

No, GPS in a radar detector doesn’t mean it’ll give you turn-by-turn navigation. Instead, RDs use GPS to warn you when you exceed the maximum speed  limit. Also, you can mark locations with high radar enforcement, so you can get an alert ahead of time when reaching those areas.

Additionally, a GPS-enabled RD can ignore false alerts in marked areas, where false alerts occur often. This isn’t a self-learning technology; you have to mark the areas yourself from your knowledge. Some newer (and more expensive) RDs have a database of red-light cameras and will alert you beforehand.

What Can Cause False Alerts?

Numerous devices that use the same frequency band as the radar detector can intercept your RD. These include automatic sliding doors, electronic warning signs, and traffic monitors. Your RD can also pick up signals from Safety Warning Systems (SWS) and In-Vehicle Technologies (IVTs). These technologies are used by some cars to prevent collisions by using a frequency-based proximity sensor.

All in all, both the Uniden DFR1 and the DFR3 seem to be great choices. They detect a wide range of frequencies and can go practically unnoticed under many RDDs. However, performance-wise, the DFR3 seems better than DFR1 (>>>Check it’s pricing on Amazon)

In our comparison, it became evident that the DFR3 is an upgraded version of the DFR1. DFR3 has more refined receivers and emitters and has a longer range. Also, it features Advanced K Technology that filters false alerts.