The Cobra RAD 480i is one of Cobra’s newest upgrades in their radar/laser detector family. Cobra boasts that the 480i effectively doubles the detection range of other units in its price range. (>>>Find out how much it costs)

Most people who own and use radar detectors do so not because they want to drive like they are Mario Andretti, but because they don’t want to get distracted and accidentally drive faster than the legal speed limit and get a ticket. Nobody wants to “donate” part of their paycheck to a traffic court because they were paying more attention to the flow of traffic around them instead of staring at their speedometer to continuously monitor the car’s speed.

This is why radar detectors have been developed. They help monitor your speed while you keep your eyes on the road. If you approach a police cruiser running radar, your detector will warn you ahead of time so that you can adjust your speed and ensure that you are driving at the legal speed limit.

Perhaps the greatest benefits of this radar detector are its ease of use and its accuracy in detecting all bands of radar in use today. It mounts securely in the center of your windshield with its dual suction cup mounts. There is only one wire, using a 12-volt outlet, to connect. Flip a single switch on the side of the unit and you are ready to go. 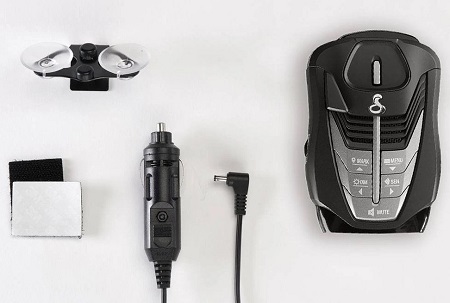 It is easy to select from the RAD 480i’s sensitivities settings. Choose from high, with next to no filtering, or to medium and low sensitivity settings. There is also a mode that allows the detector’s sensitivity to automatically change based on the speed you are traveling at. >>> Check current price on Amazon

The 480i has an easy to read OLED display that will indicate which type of band is being detected and the band’s signal strength. The strength indicator will tell you just how close or how far away the radar beam is coming from. There aren’t directional indicators for the signal, but that doesn’t detract from the detector’s overall usability.

This Cobra’s range of detection is its strong point. It can alert you whether the radar signal is in front or behind you and it will detect those signals in enough time for you to take action and check your speed. Because of the 480i’s IVT filtering (BSM and CAS in newer vehicles) and the ability to adjust the detector’s sensitivity, false alerting can be greatly reduced.

Using a Bluetooth connection, the Cobra RAD 480i can receive advance warnings in real time from other drivers, about road hazards, accidents, and speed traps along your route. Millions of Cobra users constantly update this database every day.

Radar Bands and Laser That Police Use

There are three primary types of radars in use today:

X-Band – this is the original radar band. In addition to police use for radar guns, supermarkets, drugstores, and other retail establishments use this band of radar to automatically open doors as customers approach their entryways. Because of this, it is the band responsible for many radar detector false alerts.

K-Band – although this band is also used in some automatic door opening systems, this is the band used in newer vehicles’ blind spot and collision avoidance systems. Police also like to use this band for their POP and Instant-On radars.

Ka-Band – most modern radar guns employ Ka–band radar. Up to one half of the radar guns in use today operate on this band. This band is also used for some POP and Instant-On applications.

Lasers – about half of all newer speed guns are laser equipped. A laser cannot be used from a moving vehicle so the police officer using it must be stationary. Lasers measurement distance is usually under 1,000 feet, so your detector must be sensitive to pick up a laser before it is too late.

Great detection range and fast response makes the RAD 480i a popular choice among owners of radar detectors. It won’t cost you an arm and a leg to get the protection you want from speeding tickets and other hazardous road conditions with the detector’s access to the constantly updated iRadar app.

If you want great protection from police radars without having to spend a lot of money, the Cobra RAD 480i Laser Radar detector should be a detector that you can rely on.